Consider trying one of these locally owned alternatives!

Just think of it this way, do you remember when Long John Silvers used to sell beer? Well, Joe's is like that only a sit down restaurant. Not that it is a bad thing, just don't come here expecting to get "Splash" quality seafood. Come here for a beer and breaded, greasy food.

We went there on 6/16/12 food was cold! We got steampots and noticed other peoples were steaming our potatoes were hard, corn was cold, shrimp was cold.
When you pay over $80 for 3 people (no alcohol) and poor food, we wont be going back at ever again!

I was very disappointed in the service, cleanliness, and quality of the food. They were slow in taking our order as well as serving it. When it finally came, it was overcooked and stone cold. The wait staff also did a poor job of cleaning the table prior to seating us. It took three attempts to clean it to a point where I would eat off it, and then it wasn't the best. I won't say, never again, but it'll be awhile.

A and D took the plunge. In two words: Pure Crap.

My family and I (group of 8) went to the crab shack on saturday (1/17/09) at 7pm and was told by the host that there was a 20 min wait, so I gathered my family and waited patiently. As time went by we realized that we waited longer than 20 mins and a group of 8 came in and asked if there was a table ready and the host gave her a table before us and other customers that were waiting before us... We confronted the host that we were there first and asked her why she gave the group of 8 a table before us and she proceeded to tell us that she thought we had a table for 2 only...but come on, we came in a group of asians and your tellng me that you didn't think we came together, when she even saw us walk in together??? WTF kind of service is that! Believe me that this is the last freaken time we will ever step foot into JOE'S CRAB SHACK!! That was the worst customer service I have ever experienced!!! This will be reported to better business bureau!!

If zero stars was an option, this would have gotten zero. We made a reservation for group of people and with the reservation it still took over an hour to get a seated. Management didn't care or attempt to come to our table and apologize, then service was just as bad and the food was mediocre at best. We put a complaint on the website over a month ago and tried to contact management (who through email said they wanted to talk to us), but never heard back.

I've had much better crab cakes from the Hy-Vee meat counter. Joe's Crab Shack is like an upscale Long John Silver's (but LJS is cheaper and tastes better).

Really busy, but great food and drinks. Not recommended for a quite meal. ;)

It was crowded, dirty, and service was very poor. Will not go back and will not recommend to anyone. A very dissapointing experience.

If this staff had taken the time to refill my drinks half as much as dance around the restaurant, I would rate this restaurant higher. The food is mediocre and we were not impressed. Never again.

I went there Sunday for dinner. Oh my goodness. The tackiness of the decor simply takes your breath away-I have never seen so much plastic crap hung everywhere in my life. And to think they paid good money for it. I had the Louisiana plater, which consisted of crawfish ettouffee, blacken talapia, and batter fried crawfish, along with their "famous" salad and hush puppies. The salad was average, with at least some other lettuces mixed in with the iceberg, although you only could get the house salad dressing, which was a very ordinary Italian (tasted remarkably like Wishbone's . . .hmmm). The cornbread and dinner rolls that came with the salad were good-although I am a big sucker for cornbread. It did have some nice pieces of corn in it and the bread had a sweetness to it. Now the main course was worth perhaps a D to D-. The ettouffee was greasy and tasteless, the talapia was semi-edible, and the battered crawfish were okay with lots, and I mean lots, of cocktail sauce. Granted, I have been to New Orleans and had the best dining experiences of my life there, but I wasn't judging this to that standard. Just the standard of an Iowan seafood place. Not good. Not good at all.
My girlfriend had the fish and chips and said that the fish was lighter and flakery than that she had had at the Waterfront, so perhaps that would have been the best choice.
The desert of the chocolate layer cake was very good, but it could have been smaller and have had a scoop of good vanilla ice cream with it to cut some of the richness of the cake.
The service was top notch, and is the only reason it scored as highly as it did. Although I did feel very badly for the servers when they were forced to do the Macarana. I could feel their pain and humiliation. I also noticed that when they were forced to do the Macarana and sing the birthday thing twice, the male servers completely disappeared. How curious!
So, great friendly service, crappy food, horrible atmosphere.

Probably the most grating eating establishment I've ever been to.

Too much crap on the walls. Too much fake enthusiasm from the serving staff. Too many kids running around like idiots. Too much stimulation.

We not only had great food and drinks; we had great entertainment with all the silly songs and dancing. It's definately a great place to take the kids.

You have to go for the BBQ crab legs. I agree, the atmosphere is a little hectic, it's certainly not a perfect "first date" restaurant, but go for the crab legs. The drinks aren't bad either.

joes crab shack is ok. i went there for lunch this weekend and had crab stuffed shrimp. it was ok, nothing to great. the wait staff was very energetic though. they performed the macarena a couple times while i was there.

It should be called "Joe's Crap Shack." Flavorless overcooked food.

The 1.5 is for the friendly, energetic waiters and waitresses. :( 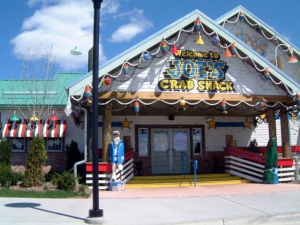