As many of you know, yesterday DMPS had a teacher in-service at the Convention Center downtown. I was with a group of 8 teachers that went to lunch at Legend’s on Court Avenue. One of the teachers in our group found a hair in her salad. When informed, our server rolled her eyes and said, “It is not my fault. I did not put it there.” Then as she walked away she said, “When can this day be over?” We thought management would like to know of her rude comments, and thought our group member who received the “hair salad” deserved to hear something along the lines of, “We are sorry for the hair, and for our server’s response.” Additionally, we thought the manager might want to speak with the server about better ways to respond to reports of hair in the food. Someone in our group went over to ask for a manager and was told a manager would be sent over. Ten minutes later, we had finally been able to pay (after nearly 1½ hours of lovely company, but terrible service), but there was still no manager. We needed to leave to get back to our meeting. We stopped at the bar on our way out and tried to speak with the manager, but she told us she was too busy and we would need to sit down for 5 minutes to wait. We told her we had already been waiting, and needed to leave. She offered to have the owner come out of the kitchen to speak with us. We said that would be great.

Several minutes later, an angry man came out and introduced himself as the owner. He repeatedly stated that he was understaffed that day and that was why our service was so poor. Each time we attempted to refocus on our server’s response to the hair, he would reply that the entire staff was stressed out because “all of these teachers keep showing up unannounced to eat”. We told him that our concern was not with the speed of service, but with the response of his server when we told her there was a hair in the salad. From approximately 5 inches from my face, he yelled, “Let me ask you something! Did she charge you for it?” I told him that we were not charged for it, but the server’s response was inappropriate. He angrily said he did not see what the problem was. He said if “anyone” lets him know of the Des Moines Public Schools in service next year he will be ready for us. We told him that would not be necessary for us, because we would not be coming back.

At that point he yelled, “Good! Get out! GET OUT! I don’t want any teachers here!” He started walking back toward the kitchen. We were stunned that what could have been solved with the simple statement, “Sorry about the hair in your salad, and about your server’s response to the hair” (by anyone…the server, the manager, or the owner) had escalated to this point. We turned to leave. As we were walking past other customers, we heard him yelling “Buh-bye, Teachers! Buh-Bye! Don’t come back!” We turned to look back and he was standing in the entrance to his kitchen waving. He then yelled, “Get out teachers! We don’t want you here! Go unionize!” Again, we were stunned at his bizarre behavior. Someone in the group said, “Seriously?” He replied by waving his arms in swooping arcs above his head, wildly gyrating his hips in an obscene manner, and yelling, “Hasta luego teachers! Hasta luego! GET OUT!” It was a very disturbing sight. I replied, “You need to get some counseling.” We quickly exited the restaurant with him yelling unintelligible things at us.

Mark Rodgers is listed as the owner of several area Legends Restaurants and Jimmy’s American Café. He is part owner of Fire Creek Inn. I plan to respect his “I don’t want any teachers here” proclamation. Additionally I will take every opportunity I have to help him keep his restaurants “teacher free”. Please pass this on to other teachers, people who support teachers, and people who not like to spend money to be publically berated by an out of control man.

This place is crap! The dining floors and the bathrooms are extremely dirty. Also, the servers are very unfriendly. Worst of all is the food. It is horrible and tasteless! I ordered a burger that was supposed to be well-done. It was dry and tasteless. I am never going to this restaurant again. I do not recommend it to anyone. I expect it to be shut down in five years.

This is a great addition to the court avenue scene. I frequent this place often to catch baseball and football games. The food is really good compared to most sports bars and they have a great selection of beers. I have been to Legends downtown probably thirty or more times and I have never had anything to complain about both food and service. They have pretty good wings and they have a spicy spinach dip that pairs pretty good with a cold one. If you're a sports bar type of person, you need to check Legends out.

Waiting for our friends to arrive, we bellied up to the bar for a drink. The bartender exhibited what is known as "zombiance" which describes a place with all the trappings of a nice establishment but employs staff reminscient of the living dead. We quickly realized the "What do you want-you're bothering me" stare was not to be followed by any courteous greeting or offering of any kind. Thankfully our Stella Artois and Fat Tire soothed any hard feelings.

We eventually move to a table and order wings as it's a sports bar kind of place and when in Rome... Our wings arrive in a timely fashion, although appetizer plates, I believe, are still on the way. We feared our waitress had died in the kitchen somewhere, as our wing bones were piling up and we dreaded having to return to the bar to get our own drinks... which we did. The bartender this time was slightly less icy as even though we received less than cordial service the time before, we still left a decent tip.

Returning to the table we found the pile of wing bones still laying directly on the tabletop as the waitress brought our round of burgers and chicken sandwiches (usual sports bar fare). The sandwich auction ended with everyone claiming their correct food (our waitress hadn't a clue) ... except one. We had to literally run down our waitress to tell her one person in our party didn't receive their order. We were told the plate was so hot it was dropped in the kitchen and they would bring it out a.s.a.p. Eh, mistakes happen- whaddya gonna do? Thankfully, in case you were starving, you could have picked over the chicken wing bones which still remained laying on the table even after our food had been delivered. Again, waitress disappeared. We make yet another trip to the bar to get our own beer & soda refills. The 'dropped' burger replacement eventually arrives and after one bite our co-diner asks if we've ever tasted ground beef that has been thawed/cooked in a microwave and how it affects the taste? We all had small tastes of the ground beef patty and yes, something definitely wrong. Our theory was in an effort to speed up the order they at some point nuked it and boy was it bad! Thankfully the wing bones were still sitting in middle of our table.

Our waitress drops off our checks, with no apology or discount for my poor friend who, never one to complain, essentially paid $9 for seasoned fries and had to wait 20+ minutes for them... OUCH!

Normally I'd have said skip the food entirely, sit at the bar and drink while watching your favorite sporting event, but considering the sevice at the bar was also way below par, I'll say skip Legend's downtown entirely. Legendarily bad!

I like the setting and the people were wonderful, the food was fresh, and I got quite a lot of food for my money. Our waiter brought me the wrong drink, but quickly made up for it, by bringing me the correct one, and still let me keep the wrong one without charging me. This place is much better than the Legends in Pleasent Hill.

Great place for a bathroom break during the Farmer's Market.

Urban Card Member Incentive: Buy One Get One Half Off. Good only on M, W, F, on regularly priced emnu items. Applies to food items only.

Don't come here after 10 unless you friends are lame!!!!!

If you order a Patron shot, it will arrive warmer than room temperature. Be sure to tell them to "chill" the tequila first.

Terribly understaffed. Groups lined up or seated and waiting...and this is on a Wednesday at 1pm. When you're serving lunch in downtown DSM, the one thing you can't do is to make people wait...

Bartenders are terrible at making drinks. Asked for whiskey and coke (simple), almost received tequila and coke by mistake. 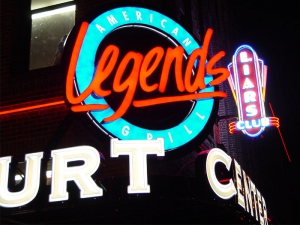